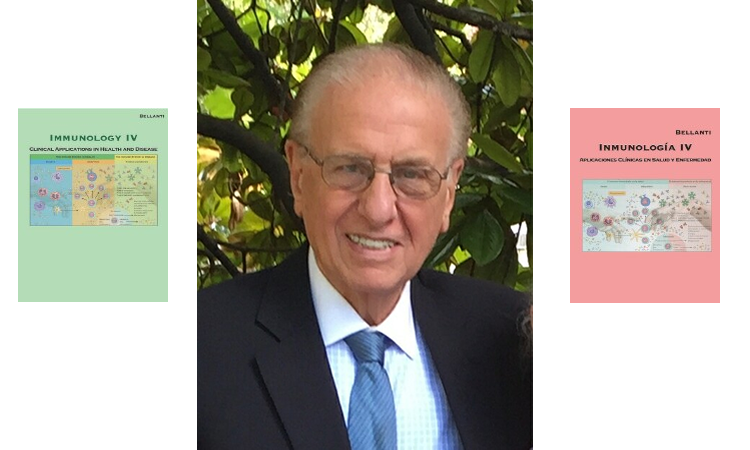 Dr. Joseph A. Bellanti, a native of Buffalo New York, received his M.D. degree from the University of Buffalo in 1958. Following completion of an internship and residency at the Children's Hospital of Buffalo in 1961, he received post-doctoral training in developmental immunology at the University of Florida School of Medicine , Gainesville, Florida in 1961-62 and later continued his studies as a research virologist at Walter Reed Army Institute of Research, Washington, DC in 1962-65. In 1963, he joined the faculty of Georgetown University School of Medicine as Assistant Professor of Pediatrics and Microbiology, where he rose to his current position of Professor of Pediatrics and Microbiology – Immunology in 1970.

Soon after arriving at Georgetown, he realized that his goal of generating new knowledge in immunology and translating it to clinical use would require adopting a multi-disciplinary approach to immunology that would involve a horizontal matrix including both basic and clinical investigators, allied health professionals, statisticians, and health educators and the public. Accordingly, in 1975 he established and became the Director of the International Center for Interdisciplinary Studies of Immunology at Georgetown University Medical Center and later Director of the Division of Allergy-Immunology, Department of Pediatrics and the Division of Virology and Immunology in the Department of Laboratory Medicine of Georgetown University Hospital, positions he currently holds as consultant. The location of ICISI in the nation's capital has enhanced its international perspective; students, physicians, and scientists from all over the world are invited to study there.

Dr Bellanti has focused a major investigative effort on antimicrobial research, evaluation of new vaccine strategies and developmental immunology. Together with other investigators, he has studied antibody and phagocytic cell function in the newborn human and in experimental model systems. He and his colleagues described the antiviral activity of the secretory IgA system in respiratory secretions and later cellular responses to viral infections following immunization or natural infection. A major collaborative effort with Mexican colleagues is being directed to the study of protective immune responses to measles vaccine administration via the nasal route, a technique originally developed by Dr Albert B. Sabin, one of Dr Bellanti’s scientific teachers.

He is past-president of the Society for Pediatric research (1980), InterAsma (1987-90), the American College of Allergy, Asthma & Immunology (ACAAI, 1991-92), and Association of Medical laboratory Immunologists (AMLI, 1992-93). Frequently, he lectures abroad in Europe and South America, sometimes in fluent Spanish or Italian. Dr Bellanti is the recipient of numerous honors and awards including the E. Mead Johnson Award for excellence in pediatric research (1970) the Outstanding Educators of America Award” of the William Peck Society (1972), from the American College of Allergy and Immunology; the Humanitarian Award for "excellence and service and teaching of clinical immunology in 1974, and the Distinguished Fellow Award in 1981. In 1998 he received the Distinguished Medical Alumnus Award from the State University of Buffalo, Buffalo, New York. He is also the recipient of two honorary degrees; Honoris causa degrees from the University of Palermo (1992) and Georgetown University (2002). .

Dr. Bellanti has published more than 400 scientific articles and abstracts, as well as numerous textbook chapters and his widely acclaimed textbook in immunology which he is now preparing for publication in its fourth edition.   He was editor in chief of Pediatric Research from 1975 to 1983, editor-in-chief of Annals of Allergy from 1982 to 1990 and currently editor-in-chief Allergy, Asthma Proceedings (2004- present).